§ Adjusted net income, excluding a non-cash expense related to change in fair value of warrants in 2009, was $9.0 million, or $0.58 per diluted share

§ Completed acquisition of Guangzhou LifeTech Pharmaceuticals, Co. Ltd (“LifeTech”), a developer, manufacturer and marketer of a portfolio of 39 TCM and Western medicine products

§ Adjusted net income, excluding a non-cash expense related to change in fair value of warrants in 2009, was $3.0 million, or $0.19 per diluted share

“I am proud to report a very productive fiscal year 2009, including the achievement of record revenues, the closing of a transformational acquisition and a meaningful financing agreement with a world-class private equity firm,” Mr. Senshan Yang, Chairman and CEO of China Medicine Corporation.  “In the fourth quarter, we successfully introduced LifeTech’s higher margin prescription product portfolio into our distribution network and, through the Guangdong Sunshine Bidding System, expanded the products’ market penetration from locally in Guangdong province to all provinces throughout China. As a result, our gross margin increased to 33.5% in Q4 2009 from 23.9% in the same period last year. Looking ahead, we anticipate continued growth in our profitability level as we accelerated our transition from a pharmaceutical distributor into a vertically-integrated pharmaceutical company with a broad portfolio of self-owned products sold through our extensive distribution network.”

Operating expenses were $2.7 million, up 61.7% from $1.6 million in the year ago quarter. The increase was primarily due to higher selling, general and administrative expenses related payroll and depreciation and amortization. Operating expenses represented 13.0% of total revenues in the fourth quarter of 2009, as compared to 6.7% in the fourth quarter of 2008.

Operating income was $4.2 million, essentially unchanged compared to that in fourth quarter of 2008. Operating margin rose to 20.5% from 17.2% in the same period a year ago, primarily reflecting the year-over-year gross margin improvement.

The Company’s provision for income taxes was $1.2 million in the four quarter of 2009, as compared to $0.8 million for the comparable period in 2008. The increase was due to the change of income tax rate. The Company adopted the usual enterprise tax rate of 25% in 2009 following the expiration of a lower tax rate in 2008.

As of December 31, 2009, China Medicine had $0.5 million in cash and cash equivalents, with working capital of approximately $16.0 million. Accounts receivable stood at $22.3 million at year-end 2009, as compared to $19.3 million at the end of 2008. Stockholders’ equity as of December 31, 2009 was $45.0 million, as compared to $42.8 million on December 31, 2008. In 2009, cash generated from operating activities was $17.0 million, an increase from $4.2 million in 2008, and primarily reflected decreases in inventories and advances to suppliers. Cash used in investing activities was $13.5 million in 2009, and reflected $3.4 million for purchase of equipment to expand rADTZ production capacity and $8.2 million for the LifeTech acquisition.

Subsequent to the end of 2009, the Company closed the equity private placement with OEP and raised net proceeds of $66.5 million. China Medicine received approximately $8.9 million of the net proceeds, which is available for working capital and general corporate purpose. The remaining $57.6 million of net proceeds was placed in escrow and will be released to fund additional capital expenditures and acquisitions upon approval by OEP and the Company’s board of directors.

"We will continue to focus the growth of Houerhuan Capsules and Shuangdan Tablets, both of which are very high margin products with limited competition. The Company plans to aggressively promote these two products through our extensive distribution network and expect to increase our overall profitability in 2010” commented Mr. Yang.

China Medicine’s proprietary recombinant Aflatoxin Detoxifizyme (rADTZ), used for removing aflatoxins in food and animal feed, is pending Chinese Ministry of Agriculture (MOA) approval. The Company has been in communication with the MOA and is currently working on reformatting the statistical data, based on MOA request, for resubmission in the near term. “We are encouraged by our conversations with the MOA and remain confident in the quality of our data submission, despite the delay in receiving the production approval to commercial launch rADTZ,” said Mr. Yang. “The Company anticipates rADTZ approval by the end of 2010, although we cannot predict the actual timing of MOA review. China Medicine completed trial production of rADTZ in 2009 and does not anticipate additional sales of the product until the full commercial launch.

“We would like to thank OEP for its confidence in our outlook and for the funding support that provides the Company with greater resources to execute our acquisition strategy and commercialization plans for rADTZ. We anticipate that 2010 will be a transformational year for China Medicine, focused on strengthening our pharmaceutical manufacturing capabilities, expanding our extensive product pipeline to include more of self-owned products that will support sustainable margin expansion, continuing our R&D effort on new product development and deepening our distribution network to cover more tier II and III cities and towns in China,” concluded Mr. Yang.

China Medicine Corporation, a comprehensive enterprise with a research and development centre, manufacturing facilities and well established sales network, engages in the production and distribution of prescription and over the counter ("OTC") drugs, traditional Chinese medicine products, herbs and dietary-supplements, medical devices, and medical formulations in China. The Company distributes its products to wholesale distributors, including more than 300 hospitals and 500 medicine companies that sell to over 2,000 drug stores in 28 provinces throughout China. The Company is developing a number of proprietary products for a variety of uses, including oncology, high blood pressure and the removal of toxins from food and animal feeds.

GAAP results for three and twelve months ended December 31, 2009 include non cash expenses related to change in the fair value of the Company’s warrants. The non-GAAP measure provides a consistent basis for investors to understand our financial performance in comparison to historical periods without variation of non-recurring items and non-operating related charges.  In addition, it allows investors to evaluate our performance using the same methodology and information as that used by our management.  Non-GAAP measures are subject to inherent limitations because they do not include all of the expenses included under GAAP and because they involve the exercise of judgment of which charges are excluded from the non-GAAP financial measure. However, we compensate for these limitations by providing the relevant disclosure of the items excluded.

This press release contains forward-looking statements concerning the Company’s business and products. The Company’s actual results may differ materially depending on a number of risk factors including, but not limited to, the following: general economic and business conditions, obtaining regulatory approval for new products, the expected contribution of higher margin products, government support for rural health care, competition from existing and new competitors, changes in technology, and various other factors beyond its control. All forward-looking statements are expressly qualified in their entirety by this Cautionary Statement and the risk factors detailed in the Company's reports filed with the Securities and Exchange Commission. China Medicine Corporation undertakes no duty to revise or update any forward-looking statement to reflect events or circumstances after the date of this release. 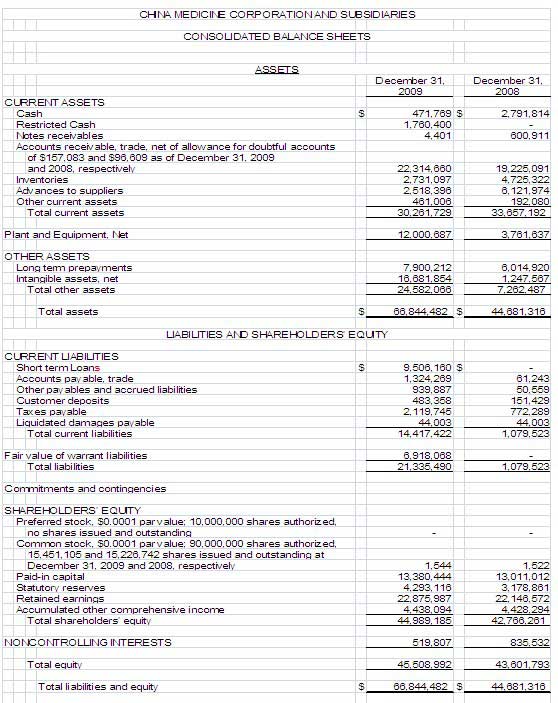 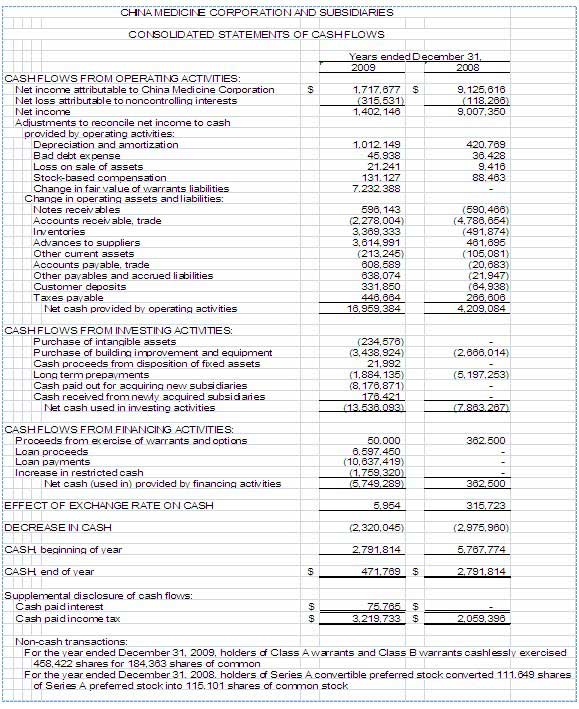 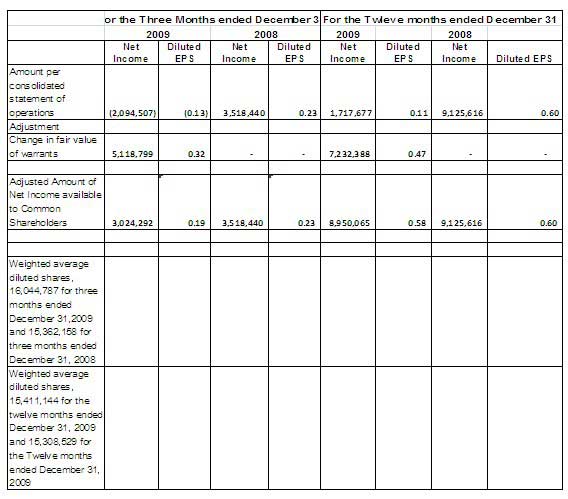