“We saw robust gross margin expansion of over 300 basis points in the first quarter as a result of increased focus on the distribution of higher margin products and increased sales of proprietary products, including those from LifeTech. Distribution product gross margin rose nearly 200 basis points as a result of increased focus on exclusive distribution products. Gross margin of proprietary products and medical technology rose to 45.3% from 33.3% with the inclusion of LifeTech products,” said Mr. Senshan Yang, Chairman and CEO of China Medicine Corporation. While our earnings in the quarter were adversely impacted higher expenses from additional personnel and amortization and depreciation associated with the LifeTech acquisition. We expect the further integration of LifeTech into our operations and continue gross margin expansion to outpace our spending level and drive significant earnings growth in the coming quarters.”

Revenues for the first quarter of 2010 rose 4.7% year-over-year to $10.6 million. To more clearly reflect the growing contribution from proprietary products, the Company has re-categorized revenues in three key segments: distribution products, proprietary products and medical technology. Total revenue growth in the quarter primarily reflected an increase in sales of proprietary products of $0.9 million from $0.5 million in the prior year quarter as a result of the LifeTech acquisition. Distribution revenues decreased 1.0% year-over-year mainly due a strategic change in the product mix that included more exclusive, high margin products and fewer low margin generic products.

Gross profit in the quarter was $3.3 million, an increase of 16.8% over the first quarter of 2009. Overall gross margin increased to 30.7% from 27.5% year-over-year, primarily reflecting strategic shift in the mix of distribution products and higher margin on sales of proprietary products and medical technologies. With an improved product mix, distribution gross margin rose by nearly 200 basis points to 29.2% in the first quarter of 2010. As a result of LifeTech sales contribution, gross margin on proprietary products and medical technology rose to 45.3% in the quarter as compared to 33.3% in 2009. As sales contribution from LifeTech’s products continues to increase, the Company expects overall gross margin to expand further.

Operating expenses were $2.0 million, up from $1.0 million in the comparable quarter a year ago. The increase was mainly due to combined higher headcount and higher depreciation and amortization associated with the LifeTech acquisition, as well as travel expenses associated with building a new sales channel and professional fee. Operating expenses represented 18.9% of total revenues in the first quarter of 2010, as compared to 10.0% in the first quarter of 2009.

Provision for income taxes was $0.51 million in the first quarter of 2010, as compared to $0.55 million for the comparable period in 2009. The Company was subject to the unified enterprise tax rate of 25%.

GAAP net loss available to China Medicine common shareholders in the first quarter of 2010 was $4.3 million or $0.23 per share, as compared to GAAP net income of $0.55 million or $0.04 per diluted share in the first quarter of 2009. GAAP net loss in the 2010 quarter included a $1.1 million non-cash gain related to the change in the fair value of warrant liabilities and a $6.1 million non-cash charge for deemed preferred stock dividend related to the Company’s private placement financing in January 2010. The non-cash gain reflected adoption of a new accounting policy that became effective January 1, 2009, requiring changes in the fair value of warrants to be recognized in earnings each quarter. The deemed preferred stock dividend reflects the beneficial conversion feature of the convertible preferred stock issued to OEP CHME Holdings, LLC (OEP) in the January 2010 private placement in accordance with SAB No.98.

In the quarter ended March 31, 2010, cash generated from operating activities was $1.4 million, as compared to net use of cash of $1.5 million in 2009. The increase in operating cash flow mainly reflects a reduction in its accounts receivable and an increase in accounts payable from December 31, 2009 to March 31, 2010.

In April 2010, China Medicine appointed Mr. Fred Cheung as its Chief Financial Officer and announced the nomination of three new directors to its board of directors. Mr. Cheung brings over 18 years of experience in auditing, financial and general management through his experience working with a "Big Four" auditing firm, a multi-national corporation, a private equity fund, and public and private companies based in Asia. The newly nominated directors, Mr. Daniel Shih, Mr. Sean Shao and Mr. Ian Robinson will stand for election to the board at the Company’s annual shareholder meeting on May 27, 2010.

In April 2010, $8 million of the restricted funds was released to China Medicine to strengthen its working capital position and to fund the LifeTech facility expansion plan. The LifeTech expansion was recently approved by the Company’s Board of Directors to expand production capacity in anticipation of the growth opportunities. Construction for the expansion is expected to commence in June and is scheduled to be competed in the first half of 2011.

China Medicine expects full year 2010 revenues in the range of $72 to $76 million, or 11% to 17% growth, and gross margin in the range of 33% to 38%, as compared to 29.3% in 2009. The Company anticipates full year operating expenses to represent approximately 10% of revenues, as compared to 18% reported in the first quarter 2010. This guidance reflects China Medicine’s current and preliminary views, which are subject to change.

First quarter of the year is typically the slowest period for China Medicine due to lower customer purchases during the Chinese New Year holiday. Additionally, the repositioning of LifeTech’s products via the newly developed sales channel and China Medicine’s well established existing distribution network could improve pricing opportunity and expand customer base to accelerate revenue growth and margin increase in the quarters ahead.

China Medicine’s proprietary recombinant Aflatoxin Detoxifizyme (rADTZ), used for removing aflatoxins in food and animal feed, is pending Chinese Ministry of Agriculture (MOA) approval. The Company continues to anticipate approval by the end of 2010 but cannot predict the actual timing of MOA review.

China Medicine Corporation, a comprehensive enterprise with a research and development centre, manufacturing facilities and well established sales network, engages in the production and distribution of prescription and over the counter ("OTC") drugs, traditional Chinese medicine products, herbs and dietary-supplements, medical devices, and medical formulations in China. The Company distributes its products to wholesale distributors, including more than 300 hospitals and 500 medicine companies that sell to over 2,000 drug stores in 28 provinces throughout China. The Company is developing a number of proprietary products for a variety of uses, including oncology, high blood pressure and the removal of toxins from food and animal feeds.

GAAP results for three months periods ended March 31, 2010 and March 31, 2009 include non-cash gains and expenses related to change in the fair value of the Company’s warrant liabilities and a deemed preferred stock dividend related to outstanding convertible preferred stock issued to OEP. The non-GAAP measure provides a consistent basis for investors to understand our financial performance in comparison to historical periods without variation of non-recurring items and non-operating related gains and charges. In addition, it allows investors to evaluate our performance using the same methodology and information as that used by our management. Non-GAAP measures are subject to inherent limitations because they do not include all of the expenses included under GAAP and because they involve the exercise of judgment of which charges are excluded from the non-GAAP financial measure. However, the Company compensates for these limitations by providing the relevant disclosure of the items excluded.

This press release contains forward-looking statements concerning the Company’s business and products. The Company’s actual results may differ materially depending on a number of risk factors including, but not limited to, the following: general economic and business conditions, obtaining regulatory approval for new products, the expected contribution of higher margin products, government support for rural health care, competition from existing and new competitors, changes in technology, and various other factors beyond its control. All forward-looking statements are expressly qualified in their entirety by this Cautionary Statement and the risk factors detailed in the Company's reports filed with the Securities and Exchange Commission. China Medicine Corporation undertakes no duty to revise or update any forward-looking statement to reflect events or circumstances after the date of this release. 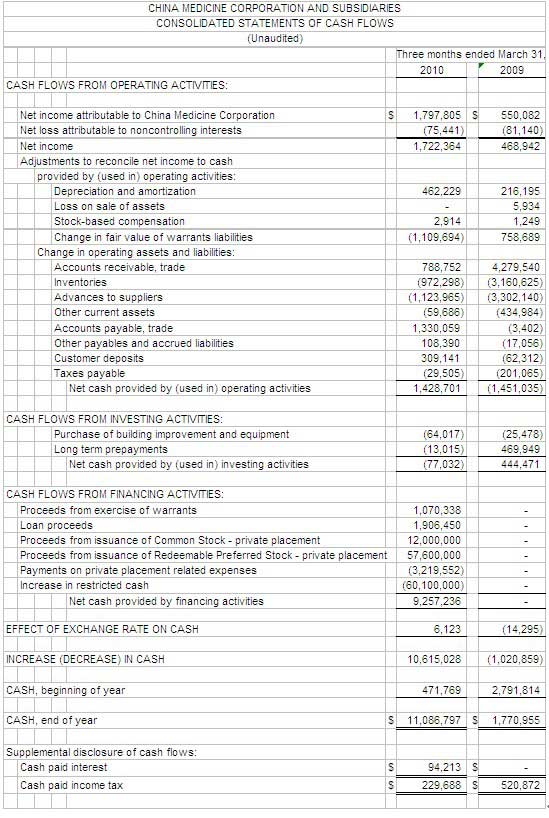 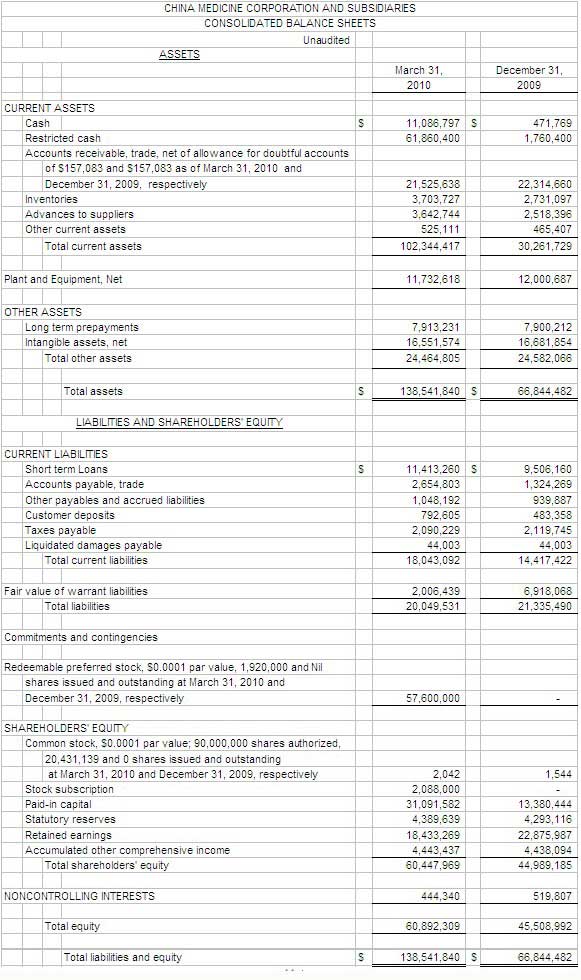 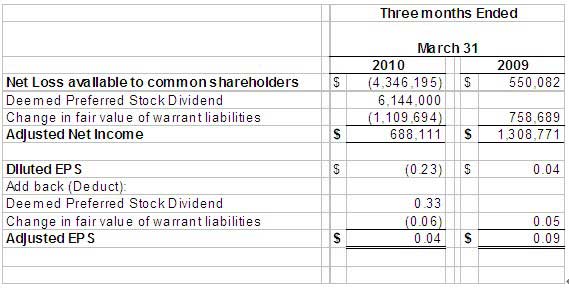